Upgraded from project.json to csproj for SimplCommerce

Today, we have upgraded from project.json to csproj for SimplCommerce. It’s simple than what I have thought. In this blog post I will share you this journey.

While working with ASP.NET Core in SimplCommerce, I felt in love with project.json. It’s an innovation, modern and simple. However, in order to make the tooling compatible with other .NET app models (WinForms, WPF, UWP, ASP.NET, iOS, Android, etc.), Microsoft has decided to move .NET Core projects to .csproj/MSBuild. More detail about this can be found here.

Struggling for a while, we finally decided to say goodbye to project.json.

After installed VS 2017 RC. I opened the SimplCommerce.sln. VS 2017 show a dialog and ask for an upgrade. Note it’s an one way upgrade. Once upgraded, you cannot go back. 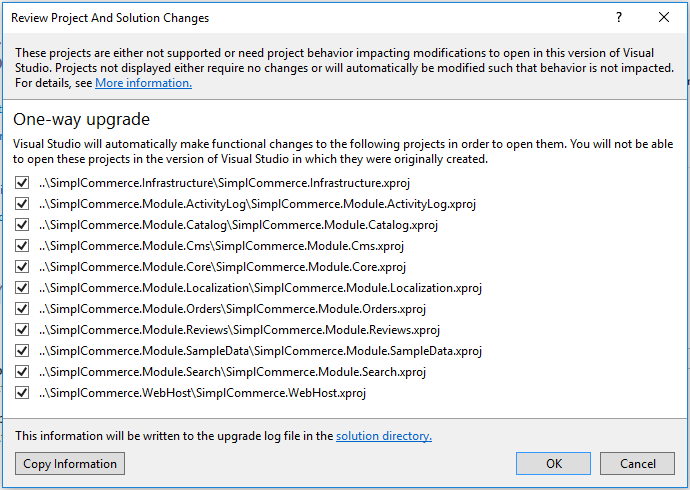 Took a deep breath and click OK. Whoo! sucessful, the migration report show no error, there was a warning on the solution file but it not important. All the projects are loaded.

Wait “Error occurred while restoring NuGet packages: The operation failed as details for project SimplCommerce.WebHost could not be loaded.” appeared in the Output panel. None of the project can build because all the dependencies could not be loaded.

Right click on the solution and then click “Restore Nuget Package” didn’t work aslo the same error appeared. Tried to workaroud in VS 2017, no luck.

Let find this string. It is in the SimplCommerce.WebHost.csproj

Let take a look at what have changed.

So SimplCommerce has been upgraded to use csproj. There are a couple of things I want to note here:

AppVeyor hasn’t offically support .NET Core csproj. But you can request to join their beta here Travis hasn’t support also. I have submited the request https://github.com/travis-ci/travis-ci/issues/7301

And below are some useful references: